My rainbow patchwork project has been coming along, although things are currently at a stand-still because . . . I changed my mind about backing fabric, which meant I then changed my mind about what fabric to use for binding . . . and I’m now having to wait for a fabric order to arrive lol.  Typical me!  I wasn’t supposed to be buying in any more stash this year, but this is an absolute emergency/necessity!

This is how things were looking on 25th May.

The original plan was to use a lovely star print fabric somewhere in this design, preferably for the binding.  I mean, I’d chosen my fabrics for chevrons specifically to pick out the same colours in stars!

There’s the star fabric, sitting under all my chevrons as I was making.  However . . . when rummaging around for a suitable sized piece of fabric for backing, I came upon something very “busy”, which I had totally forgotten about, and which I’ll show you a bit further down.  Once rediscovered, I wanted to use it but the star fabric simply would NOT go with.  Anyway, I’m getting ahead of myself since before binding can go on, I needed to sandwich and quilt (after adding 2.5″ strips of white to give a crisp outer border.

Since quilting isn’t my strong point, I kept things very simple and almost invisible.  I took things one column at a time and just did some quilting in the ditch, around the coloured chevrons . . .  here is a very rough sketch of that (my quilting is actually better than my sketching lol).

Sort of went around the edge of each chevron, in a clockwise direction, going 1, 2, 3, 4, 5, 6 and then did vertical lines (7&8) to get me to the tip of next chevron.  I started by quilting the central column (green chevrons) and then quilted the other columns working outward each time. It works for me.  And, as I say, is fairly invisible on the front . . . but a little more visible on the busy backing fabric I chose.

How fun is that, eh?  So much going on there, what with rainbows, umbrellas, balloons, animals and so on.  I’m thinking it’ll be a great quilt for learning colours (except I have no pink or brown in my rainbow).   Anyhoot . . . that’s progress so far.  As soon as new fabric arrives, I’ll be able to get on with binding . . . and I’ll come & share my happy dance with you!

I showed you the start of a new patchwork project the other day . . . things have started to come together!  After making my HSTs (half square triangles) I set to assembling those into little blocks and went for my original idea of chevrons.

First, I sewed together my pile of top points, and then my pile of bottoms, taking care to iron seams to the right on one pile and to the left on the other pile, so seams would fit nice & snug.

This photo (for those who aren’t familiar with patchworking) . . . I’ve placed two pins  either side to show you what’s perfectly normal at this stage.  The coloured fabric looks odd on that horizontal join because, of the 1/4″ seam allowance).  What’s important at this stage is for the centre points at the top of triangles to line up nicely.

It’s always so much quicker, when machine patchworking, to chain piece (ie, not cut thread after each seam sewn).  So that’s what I did on each stage, with my little piles of fabrics sitting neatly beside me.

Here was the joining of tops to bottoms . . . which I then ironed open, and then I did more chain sewing, to attach my blocks into columns. 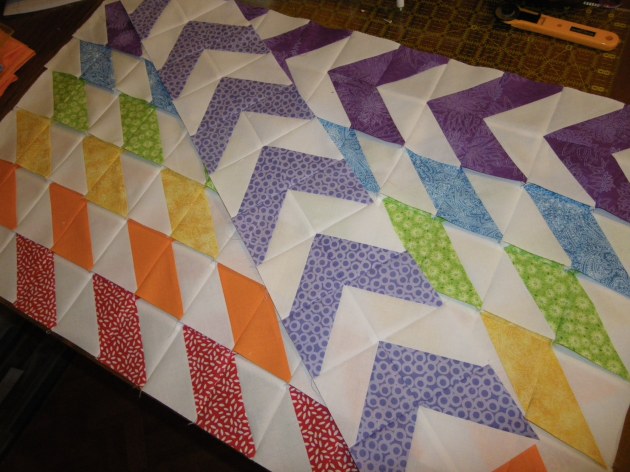 Don’t they look pretty?  And another photo to show seams on the back.

It was at this point that I suddenly wished I had a brain.  So intent had I been, on respecting rainbow colour order when sewing my columns, I sewed all same colours together, giving me 7 columns of 6 identical colours when my original plan had been to sew columns of changing colours, which would have given me 6 columns of 7 rainbow colours.  Oh well . . . I did say that I don’t plan and make things up as I go along, so it’s all my own fault!

Not to be deterred . . . I carried on with the next stage, which was to sew white sashing to the right side of columns

I never bother pinning so always find a quick pen mark (disappears with heat) helps to mark the sashing and make sure I get my blocks lined up nicely.

Anyway . . . for the time being, things look like this

It’s certainly looking crisp and bright!  And even though I made the mistake regarding columns & rows, I have to say, technically, it’s not too shabby!  Next stage will be to add 2.5″ white strips all around but quilting won’t happen until my order of wadding arrives (which hopefully will be sometime this week).

A few years ago, I made a very bright patchwork lap quilt, using a pack of Moda charm squares, and things ended up very pink.

Well, pink and green and blue and purple . . . I called this quilt “Tickled Pink” because I accentuated the pink fabrics by using pink for backing fabric and binding.  At the time, I decided this would be a lovely design to try in a different colourway, and actually cut out some very bright fabrics, including more pink . . . but things got put away and forgotten about.

Until earlier this week!  When I looked at my fabrics again, decided the pink was “too much”.  I substituted for red . . . and suddenly, I had the beginning of a rainbow!

These are all fabrics from my stash, and all have been used in previous projects . . . I guess I just love bright colours, eh?  Anyway, the reason I went for all these rainbow colours is the fabric on the left.  That’s quite a large piece, left over from a quilt I made for Little Viking, when she was born.  You may remember.

Anyway, the plan for my new rainbow quilt is to make either pinwheels or chevrons (haven’t decided yet) but I did get as far as the first stage of piecing.

Now, most patchworkers know this short-cut method to making these little triangles (HSTs), but in case you’re new to patchwork . . . here’s the trick.  You cut squares in your coloured fabric and equal number of squares in your background fabric.   You place right sides together (one colour & one background),  sew a 1/4″ seam all round the sides of the square.  Then you slice diagnonally. 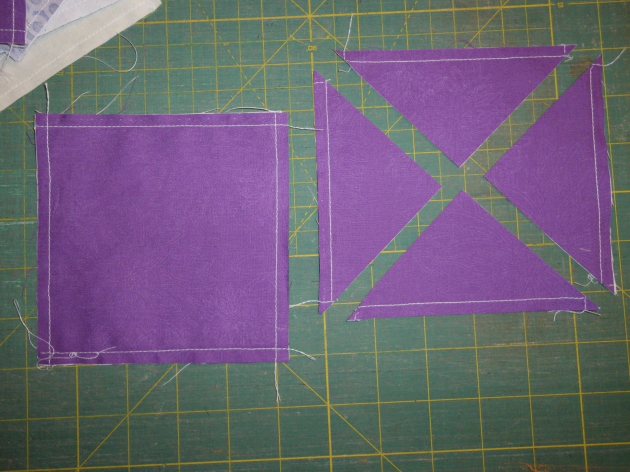 You then iron open.  And have the beginnings of little pinwheels.

which you can mix and match if you fancy

or (in my case) move about and make chevrons.

There probably are easier ways of making chevrons but I’m starting out with my HSTs because I haven’t made my mind up yet whether it’ll be pinwheels or chevrons for this quilt, so I’m keeping options open.  Some patchworkers have a clear plan of what they’re doing before they start.  I’m more of a “let’s make things up as we go along” crafter.  What I do know is that the yummy star print fabric is going to star in this quilt! 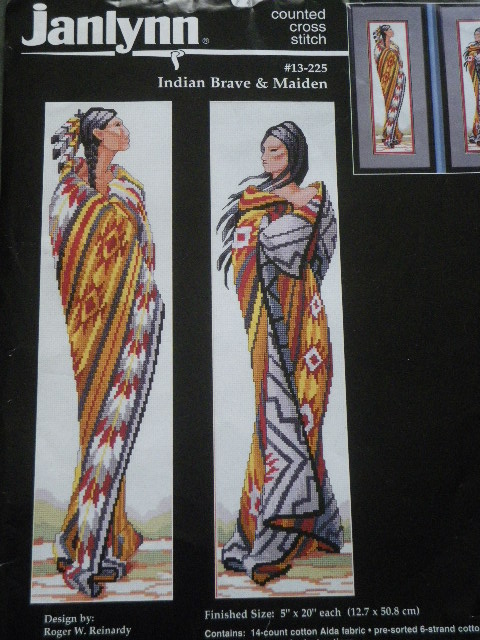 Only people who’ve been following me for a very long time will recognise the above photo.  A cross stitch kit I stitched way back in 2013 although I probably bought the kit as far back as 2004:  Indian Brave & Maiden, design by Roger W. Reinardy.  I did the cross stitching of these two very proud Indians 7 years ago . . . finished pièces were folded and put in a drawer . . . but did get pulled out of said drawer in 2016 when I set to creating a patchwork border for both.

For some reason (no idea why) I didn’t actually get on with the next stage and they were folded and put back in the drawer.  Until, last week, when I finally sat down to do the proper finish.

Luckily, I had folded them away with the solid red fabric for the binding but couldn’t remember what I had planned as backing fabric, so I used some bedsheet.  I kept quilting very simple: orange thread stitching in the ditch. 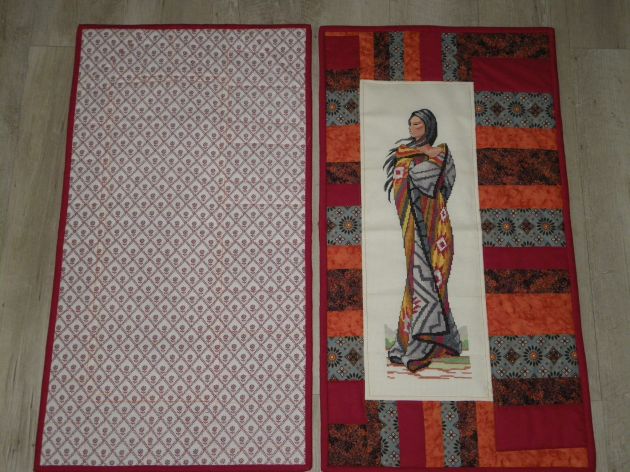 I’ve finished them as wall-hangings. You can’t see in photo because my pattern matching is almost invisible lol, but I cut two 5″ squares in bedsheet, folded into triangles and sewed them to top corners on the back of both so I can slip a wooden rod into the pockets for hanging.  Each Indian finished up at 29″ x 16″ (74cm x 41cm) so I now need to find a suitable wall to hang them from!  Am rather surprised, now they’re done, that I didn’t get them finished sooner.  I reckon these will go down in history as my longest WIPs.

It’s time to link up with Gun and Kate for the once a month ScrapHappy day!

My scrappy project this month is very colourful.  And practical.

I had a good rummage in my bags of fabric scraps, pulling out only bright strips, to make myself a folding tote bag. 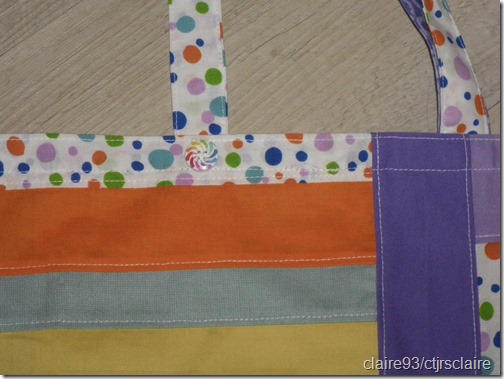 To make sure it doesn’t fall to pieces and will be strong enough to carry a certain amount of weight, I sewed all my strips together, overlocked each seam and then top-stitched. 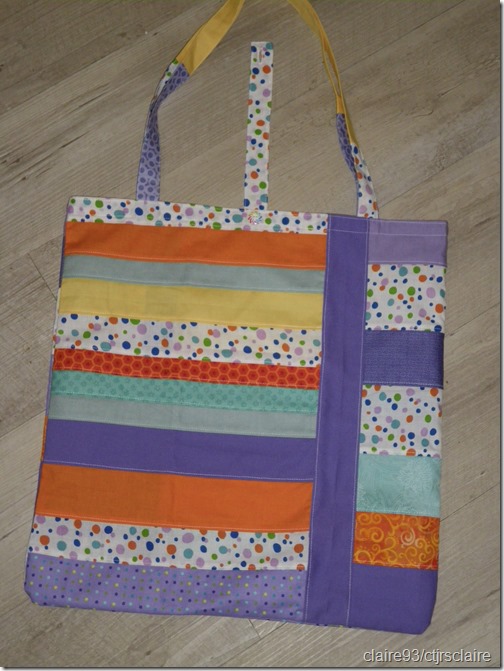 But before I do, let’s hop over to other links and see what other ScrapHappy members have been up to.

This is the third & final post for my “2019 in review” series.  For this last one, I’m grouping together cross stitch, patchwork & general sewing.

Several cushions, which I always find is a great way to combine cross stitch and patchwork. 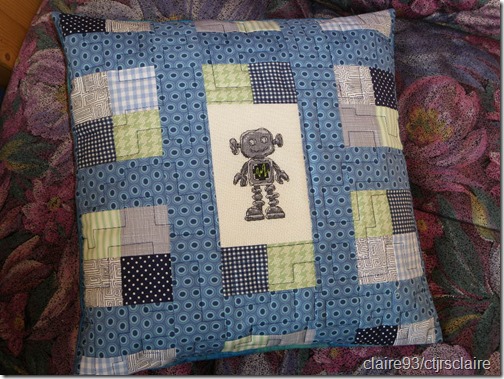 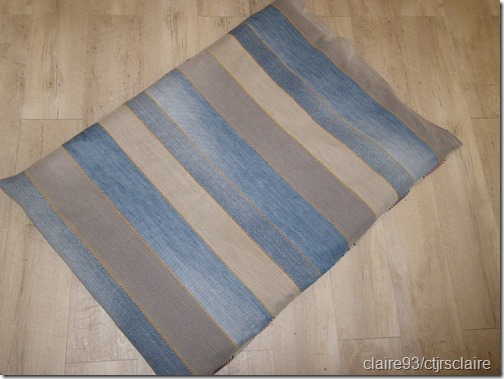 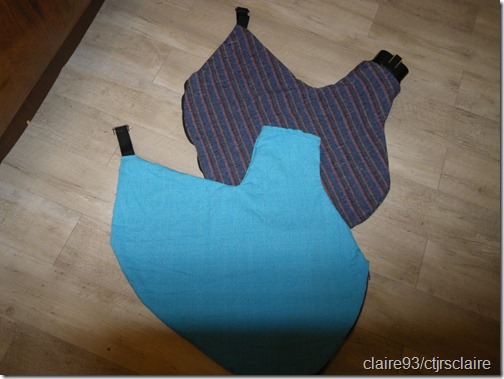 one scrappy “I Spy” quilt.

a “spotty dotty froggy” memory game . . . made for Toddler Viking.

There were a few other finishes, and small projects, but I think all of the above are enough to remind me of what fun I had crafting in 2019.

I expect everyone is really busy, getting ready for the festive season.  I am too.  A stint of housework (especially dusting and tackling cobwebs) before putting up the tree, but also some sewing.  There are going to be six of us for lunch on 25th this year, and I decided we needed some festive placemats.  So, out came the scrap box of “festive fabrics” or anything that would blend together, and I made a matching set of eight.

I quilted the outline of a Christmas tree on one half and then some straight line quilting on the other half.

So, that’s another crafting project to tick off the list!