Today’s SAL update happens to fall on 15th of the month, which is also ScrapHappy day . . . so if you came looking for that, it’s in a post published earlier today.

For SAL members . . . summer weather, hot sweaty hands, and sticky needles, mean I got distracted with other crafting these past 3 weeks, and only put in a couple of stitching sessions on unicorns.

This is the photo I posted last time.  I’ve been filling in.

Still working on page 1 (of 4) but the picture is beginning to take shape!  Apart from the second butterfly, you can now make out one of the unicorns, with the neck & jawline appearing (if you squint) bottom centre of this photo.

I’ll be plodding along and hope to finish page 1 over the next 3 weeks. In the meantime, I’m going to see what other SAL members have been up to.

and we’ll be back on 5th September.

Today is the day to link up with fellow ScrapHappy people.  Today also falls on the same day as my usual SAL update, so if you came looking for that, it’ll be in a slightly later post.

My photo for August was actually taken in July, only shortly after the last Scraphappy day . . . as I crocheted some more squares for the local yarn bomb. 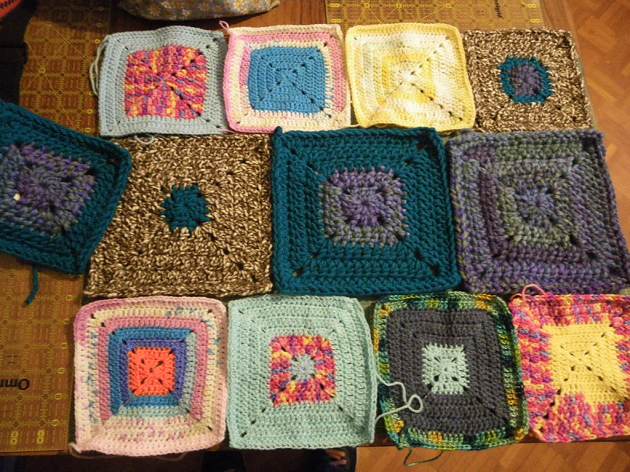 None of them are terribly “pretty” but I really was going through the dregs of my leftovers.  There was a masked, socially distanced, get-together at the end of July to assemble squares with other ladies, at the local library.  I was rather disappointed to see the poor turnout, and the rather pitiful pile of squares that had been contributed. But, living in a village, population 1600, there weren’t very many local knitters or crocheters to participate.  We assembled the squares (alternating sizes, and trying to get a variety of colour) into five lengths of bunting.  Sadly, I haven’t been able to take photos because the bunting has been hung inside the library, and it’s currently closed for summer hols.