I’m going great guns on my patchwork blocks and spent Sunday drawing my three new templates, cutting fabric and assembling my sixth block. “Kaleidoscope” (middle block of second row). Rather fiddly in the centre, to get all points to line up (and they don’t quite) but if you don’t look too closely, it’ll pass lol.

I haven’t yet decided how I’m going to lay-out my blocks – and will have to wait until the other three are complete, but this is just to give an overall view of blocks done so far. Remaining to be done is “the cottage” in trapunto (a sort of boutis), “pack of cards” which is the next one to tackle and is going to be quite tricky and then “log cabin” which I won’t be able to tackle until patchwork club starts up again on 7th March because I need to listen carefully to instructions on how to do that.

Anyway, I’m rather pleased with my work so far – I said I wanted to complete four blocks during the half term holidays and I’ve done three . . . one week of half-term left so I should be able to meet my goals AND even finish my cottage in trapunto (who knows?)

I can’t show you some of my current stitching as I’m working on a few surprises BUT I can show you the latest update in the SAL “Spring in my garden” a free Barbara Ana design.  Lots of fun to stitch, but I need to add some orange and red in the next stages because colours aren’t quite varied enough for my liking yet. 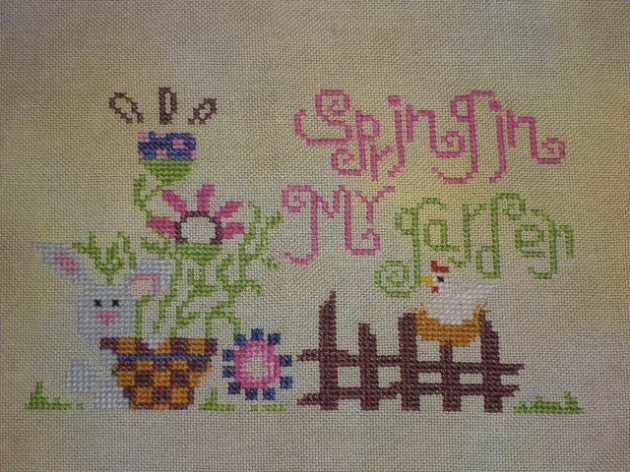 Mmmmm – another block complete but not perfect. The not perfect part shows up quite well I think . . . it’s my “curve” around the quarter circle that tends to be a bit straight at times.  I got better with curves when I stitched the outer curve though, so it’s definitely a learning process.  For the moment I’m going to leave things as they are, and move on to the next blocks but I might be tempted to unpick and redo the smaller curve before I assemble blocks. It all depends on how much it annoys me once it become part of the whole thing.

Time to give you another update on my half-term holiday resolutions.  I’m not doing too badly, but I haven’t done as much as I’d hoped.  Five days on, and I have completed a second assignment for Animal Care but since I was hoping to complete SEVEN in two weeks, I’m way behind.  Maybe I was being overly optimistic, in thinking I could do one every other day? Not to worry, I’ve still got 9 days left so anything is possible.

The only machine sewing done so far was the cushion cover . . . so next week I need to remedy that. However, I have been patchworking.  I have finished my “Sunbonnet boy”

so have four blocks all done

and I’m making good headway with the “Fan” block (but will post photos when that’s complete).  I’ve already started thinking about what colour fabric to use for the bands to assemble my blocks but don’t have much of an idea yet. My most colourful fabric, in the blocks, has a variety of colours: so I am thinking I need to pick out one of those. Was thinking about a turquoise-green (on the edge of second photo) but that doesn’t quite do it for me so am now wondering about lime green, yellow or blue. Problem is I don’t have any plain fabrics in those colours in my stash so I’m going to have to find a fabric shop and go along in person to choose.

Lovely Lionel stopped off again yesterday with more birthday gifts – this time from Joce.  A lovely fat parcel containing lots of cat-related goodies.  A magazine full of CAT cross stitch designs, a book by Marie-Thérèse Saint-Aubin, AND a beautiful hand-stitched bookmark for my collection. 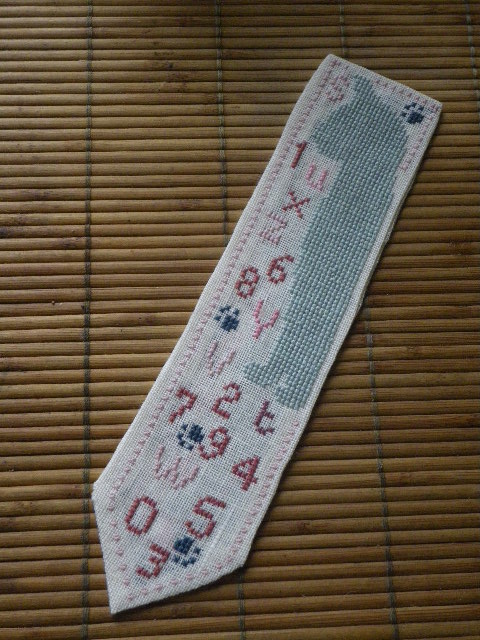 when I posted photos of my finished “Rondo” project, Avis of Oh Sew Tempting, mentioned a secondary design of four large hearts within the design. However as  much as I squinted (with or without contact lenses in) I just couldn’t see it . . . so Avis took the time to fiddle around with my photo and high-light what she saw in light blue

and WOW, now I see it ^^  I wonder if the designer intended it? or if it’s pure fluke?

A few hours with my sewing machine (in keeping with my half term resolutions) and I have finished off one of my latest cross stitch pieces.  “Rondo” (Whispered by the Wind) even when I began stitching this design, I knew how it would be finished off, quite simply because of it’s perfect square shape : a cushion cover.  That’s why I didn’t use Threadworx threads, but went for DMC variations because I knew I needed to use a thread that could be washed.

My sister (who won’t be visiting my blog so I can tell you without worrying about spoiling the surprise) turned 50 this month and I was hoping to have this ready to send in time for her birthday but I didn’t so it will arrive a few days late.  I hope she likes it ^^ 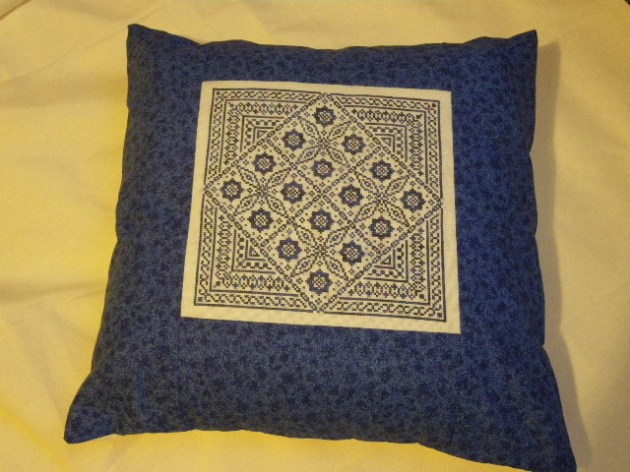 Birthday surprises are still arriving by post – so a big thank you to Karen, who sent me a lovely brooch which can also be worn as a pendant, a set of Russian doll writing paper AND a whole load of fabric squares (three of each design) to give me plenty of inspiration for patchworkings. 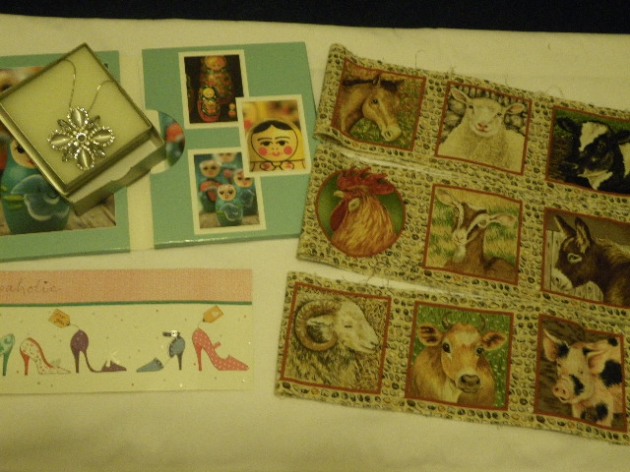 and from Stéphanie, a hand-stitched card and a magnetic bookmark for my collection ^^

So a big thank you ladies.

For those of you wondering how I’m getting on with my half-term holiday resolutions . . . well 48 hours on, and it’s going well ^^

I have managed to do a total of 6 hours studying, which means one homework assignment all ready to be posted (on viruses and bacteria) and I’m now working my way through the chapter on inflammation and anti-inflammatories.  Gripping stuff hihi. This afternoon I spent a couple of hours sewing with my daughter. My sewing didn’t get very far as I ended up offering suggestions, moral support and eventually helping out with Lindashee’s project, which is a dress for one of her MSD sized BJD dolls. The doll is 42cm tall  and pieces are a bit difficult to assemble.  No photos to show today, as it’s all still a WIP but hopefully in a day or two.

Today, Monday 20th, is the first day of the fortnight half-term school break. Some people go away, but we’re not as my other half is working, and besides, with 4 cats and one dog, it’s rare for us to take a holiday. Not that I’m complaining because I’d much rather have the pleasure of all my four-legged friends all year round, to keep me company and amuse me with their antics than have a few weeks away each year.

Anyway . . . usually, during the school holidays, days seem to slip by so quickly, and I get into the bad habit of sleeping in, of staying up late, and generally don’t make the most of my free time. So today, I’ve decided I need to make some half-term holiday resolutions and stick to them.

Aside from cross stitch, which will continue per usual (since that’s my evening occupation in front of the TV) I have made myself a list of things I really MUST do . . . and thought if I published the list, for all to see, that it might motivate me to stick to it.

My Animal Care correspondance course. Alas, studies have fallen by the wayside (since November in fact) and I have to admit (withc shame) that approximately 18 months after beginning the course I have only competed 24 of the 49 assignments. Aarrgghhhhh.  So my first resolution is to get back on track – complete the module on “Pharmacie des Animaux” and do the complete module on Veterinary Hygiene.  That means a total of 7 assignments so, one every 2 days. It’s perfectly feasible so today I will get cracking. 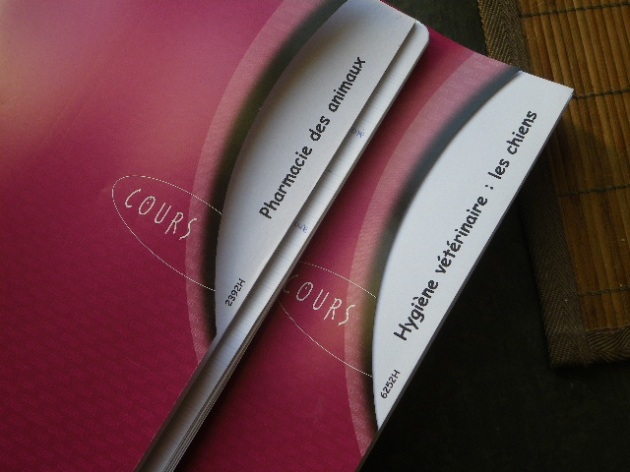 Next resolution concerns patchwork.  Since I joined the patchwork club in October, I have only really done any patchwork at the club sessions – which means only a few hours each week. If I carry on at this rate, my 9 block quilt project won’t be finished by the end of the year so . . . I need to put in some patchwork time and work on my own. The aim there is to finish off my “Sunbonnet boy” and then make up blocks for “Fan”, “Kaleidoscope” and “Pack of Cards”.  That will mean I only have to finish off my “cottage” and learn how to do a “log cabin” and should be ready to start assembling blovks by Easter.  That’s the plan, anyhow ^^

Third and fourth resolutions are to find some serious sewing machine time.  I have a couple of cross stitch projects waiting to be finished off AND it’s been simply ages since I did any BJD clothes making with my daughter – so plan on ear-marking at least two full afternoons for machine sewing.

My fifth and final resolution is to spend less time just browsing the internet over the next 2 weeks, and keep my Visa card safely hidden ^^  I gave in to temptation the other week, and bought SIX of Isabelle Vautier’s charts. 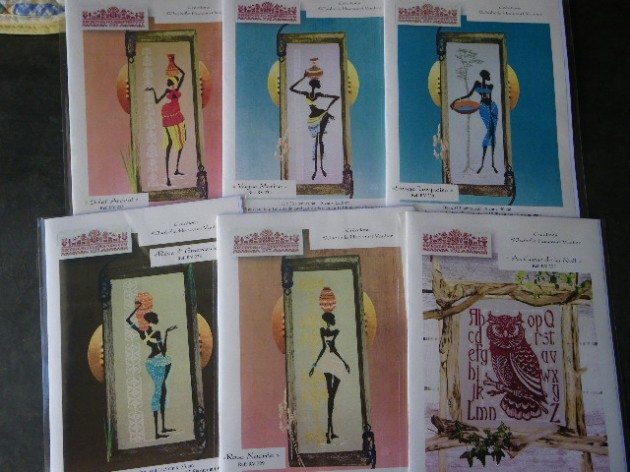 The complete series of African women, and a monochrome owl.  I don’t regret my buys BUT I am  going to be firm with myself. No new starts until the end of the holidays and I have kept my half-term resolutions.

It is sooooooooooo exciting to receive photos to see how other people have stitched a design.  Here is Sandra’s finished “hearts in a square” – in red and grey which really makes the hearts stand out.  Sandra tells me she’s going to finish it off into a pouch/cover for her Kindle so I can’t wait to see that ^^ 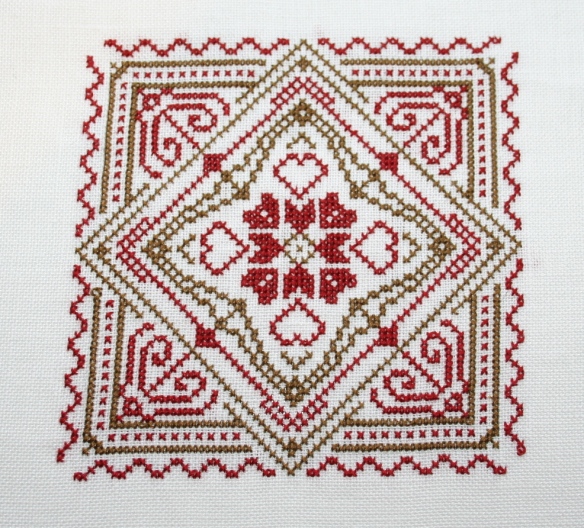